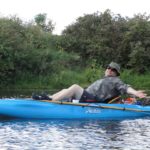 John Hoffmann was born and raised in Appleton Wi. He spent his youth on the rivers and enjoyed camping and fishing. He graduated from UW Whitewater in 1983 with a degree in Business Administration. When he has the time he enjoys building wood strip canoes and spending time with his family. At Rendezvous he is seen standing behind the bar, talking about history or if you dare politics. He is not persuaded easily and loves a good debate. Loves to duck and deer hunt but mercifully isn’t a very good shot. He tries to get outside as much as possible to help with the canoe and kayak trips. 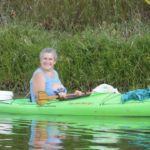 Charlotte Hoffmann was born and raised in Montello and spent her childhood at Buffalo Lake Lodge where her family owned the business from 1954-1976. She enjoys spending time on the river hunting for treasures. She loves to take people out to search for old pipes and bottles. She is now a grandma and loves to spend time with little Levi. She is seen running around Rendezvous, taking orders and dishing out a lot of sass.

Mauri Prouty was born and raised in Montello. She graduated from Carroll University in 2013 with a degree in Public Health. She enjoys spending time outside going on hikes with her dog Sophie, spending time on the water and looking at the stars. At Rendezvous, she can be found in a hot kitchen cooking up tasty concoctions. 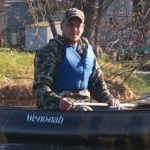 Kyle Prouty was born and raised in Lake Villa, Illinois. He finished a 4-year apprenticeship with the Chicago regional council of Carpenter and worked in the Chicago land area for 6 years. He decided he would rather enjoy the Northern lifestyle where he could enjoy hunting and fishing whenever he wanted without the long commute to work. He enjoys duck hunting and spending time on the water. At Rendezvous, Kyle could be anywhere. He loves to be outside cutting the grass or helping people into a canoe. He makes one of the best pizzas in town (right after Mauri) and pours a nice beer to go with it.